Rain stopped play yesterday so I only made it back to Swanpool today to check on the progress of the nesting pair of resident swans. Down at the water’s edge a bevy of mallard quack expectantly in my direction. Their luck’s in: a family with toddlers and a bread bag are also passing. So are the seagulls, airborne the better to snatch a snack. Cue cries of bullies on wings! from the bread throwers: they’re monsters! they take the chicks as well, you know, one elaborates, while the dad quickly snatches up a vulnerable toddler as if he were too at risk of gull predation.

South end of the pool, no sign of the swans. I head in the direction of the nest, but before I get near I see a white shape in the reeds – no, two white shapes – Mr and Mrs, then: the eggs must have hatched! And yes, there they go, out into the pool with some little shapes bobbling behind them; or rather here they come, as they’re heading in my direction. I realise I should have brought bread as this is clearly what they’re expecting, but it’s ok, the bread-throwing family were here before me and there’s a tideline of soggy crusts where the wind’s flopped the water over the edge of the pavement.

I don’t actually know how many eggs were laid in the end, or how many of those successfully hatched but there were only two cygnets: six inches of grey fluff with neat dark blue bills that continuously emitted a mousey peep-peeping as they paddled along. I had in my head an idea of tumble-dryer fluff but they were much cuter than that. (Can I say that? Really? On a Serious Nature Writing blog? Well I’m a fan of honesty and accuracy…)

Their down looked so soft I imagine it would be hard to feel the texture of it if you were to touch them. They were close enough to do so but I wasn’t tempted, not least because the parents were right by and they’d probably have had my fingers off. Here at Swanpool the wildlife is well used to humans at close proximity, but I like to feel I maintain some boundaries. So I crouched still while they dabbled at the sogged bread and bits of water weed, the babies experimentally pecking a blue sweet wrapper that had blown into the pool (bread found to be preferable). They looked too fluffy to be waterproof, more like they’d soak up and sink, except that water beaded incongruously on the surface of their down like glass droplets. In fact the down isn’t naturally water repellent: they get their waterproofing from glands under the parents’ wings. Cygnets don’t go in the water for at least a day after they’ve hatched, and their first excursion will be a quick bath (to get rid of the eggy gunk), a dabble for food, then back out again. In heavy rainfall it’s not unusual for cygnet hatchlings to become waterlogged and drown. Given the bad weather we had at the beginning of the week it is possible that this could have happened to any extra chicks from the brood. Predators are also a major threat to new cygnets: I don’t know if there are mink around here but there are certainly dogs and foxes. Much more likely are the great black backed gulls – they may not be able to manage a toddler but a swan baby would be an easy mouthful, and there are no shortage of gulls at Swanpool.

Up at the top end of the lake a coot chick (coot, not cute – and it wasn’t at all cute after those adorable swanlets) was dabbing around whilst its parents alternately dived for and surfaced with food. On the aptly named duck boards a bundle of mallard ducklings snuggled so close together they blended into one single brown furry lump like a sleeping cat. The coot parents woke them up, revealing a brood of five, some of whom plopped into the pool and paddled off. They’re obviously a few weeks old as they’re as big as the cygnets and well able to go off by themselves without mishap. Their father looked different to a normal mallard drake, darker brown and russetty backed, with a white chest and no white clerical collar under the blue-green of the head. One of the five chicks clearly took after him, as it was almost all chocolate brown instead of the typical brown-yellow brindle.  I wondered if the father was a hybrid with another species but I couldn’t find anything remotely similar in the bird guide. Later I discovered that domestic mallards come in many more varied strains than the wild ones: a pale cinnamon-cream mix; a very dark; a white bibbed. Escapees are inevitable: hence the more exotic complexions which have entered the Swanpool gene pool. 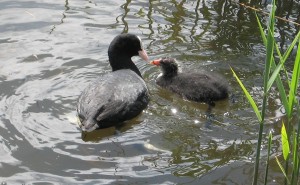 I’m aware of the criticism that nature writing can be a bit too Nice. It’s difficult to be otherwise with such engaging water babies. Afterwards I was watching a well-camouflaged sparrow having a dirt bath when a small brown face peeked out from the undergrowth and popped back in again. Then it scurried – quick, brown, long-tailed – across and among the tree roots in the bank where it too blended in so well I lost it when it stopped. I’d like to think of water voles, but let’s face it, with the duck bread and the nearby picnic litter from Swanpool Beach it’s almost certain they were a much more common species of water-loving rodent. And though I doubt they’d have plundered the swan’s nest, rats would have no qualms about taking eggs or chicks from smaller water fowl.

One thought on “Water Babies”