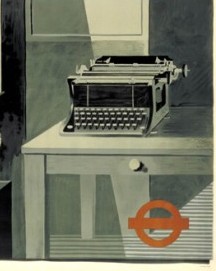 Anyone outside of London who has not logged in to Google today may not have realised that it is the 150th anniversary of the London Underground. Then again almost every website I’ve visited has had some sort of Tube related slideshow, top ten, or did you know going on so, I thought, why not jump on the band waggon, or perhaps slip through the air-powered sliding doors of the red and white carriage (the last manual doors on the Tube were phased out as long ago as 1929, didn’t you know) and pull up a long overdue Underground blog post whilst it might be deemed mildly topical.

When writing about place you inevitably end up discussing travel, and whilst roads and railways are by definition very placeless the London Underground has a very definite sense of identity, not least its graphical-visual one exemplified by Harry Beck’s 1933 map which has become a cultural icon both for the Tube itself and for London. Although it opened in 1863 it is the early twentieth century London Underground styling that has become iconic: that Art Deco glazed tiling, the fancy brickwork, and decorative but functional wrought ironwork that sits so well with the retro style posters and Edward Johnston’s 1916 font still used today for Underground lettering. It’s the sort of styling that easily passes unnoticed because everyone is so used to it, but is actually quite beautiful when you start to appreciate it. I venture to add it would almost certainly would be a lot less beautiful and intricate if it were invented today. It is also the sort of styling that has filtered through into public consciousness and overspilled into so many other aspects of our lives without us even realising it. In the new book Underground: How the Tube shaped London it is suggested that the Underground has probably had a bigger hand in shaping London as we know it culturally and aesthetically today, than anything else.

But it’s not just the look of the place – and yes the London Underground most definitely counts as its own place – it’s the feel of it. The stifling heat even in the depths of winter. The ferocious winds fanning the skirts of the unawares as they descend the vertigo-defying escalators. That smell. The sound of the buskers – only legalised as late at 2003 – echoing characteristically along the tubular walkways. The utter blackness of the black hole that the train emerges from and enters into. The blackness of your snot when you blow your nose after travelling. That sound, impossibly loud, a chthonic roar that races along the tunnels preceding and pursuing the trains like some invisible hellish familiar.

The first time I travelled on the Tube I was three or so years old and scared out of my wits. I screamed the entire way. I think I thought I’d arrived in the pit of Hades, not that I knew about Hades when I was three. Though not remotely afraid now I recognise why I would have been, and I’m sure there are plenty of claustrophobic, bathophobic, and other generally fearful but otherwise rational adults who would agree with me, even if only 45 percent of the Underground is in tunnels, and many of those are not so far under the ground at all.

The rational explanations behind many of the Tube’s idiosyncratic features are not even that exciting, and mostly quite obvious when you think about them. It is so hot all the time (peaking at 47°c in the summer of 2006) due to the build up of heat generated by the friction of the trains’ braking systems. The natural air temperature underground is warmer anyway – although the Underground system is not deep enough for this to make a significant difference. The temperature would rise 1°c every 60m down you go, but at 58.5m below ground level even the deepest station, Hampstead is not as deep as it seems when descending those enormous escalators (the biggest of which is at 27.5m vertical rise at Angel). The heat is exacerbated by the warm air generated by the trains not being able to escape even with the ventilation system in place. Add to this the body heat of approximately 2.67 million passengers a day, many of whom end up squashed together at peak times, no wonder it’s so toasty. 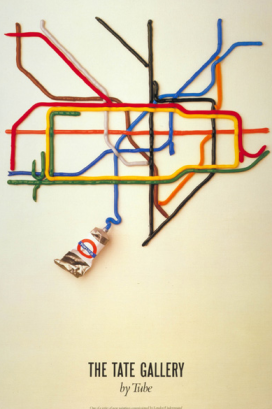 The trains themselves are also responsible for the strong gusts of wind. Due to the fact that they are such a snug fit in their tunnels – the nickname Tube was coined back in 1890 and is no misnomer – air is compressed and pushed along in a sort of hydraulic effect. As for the smell, the spraying of perfume was once trialled at a couple of stations, but its scent was deemed worse than the characteristic re-used industrialish air it was supposed to be covering up. Mind you, the air down there is much worse than it smells – hence the black bogeys. Apparently 20 minutes breathing Underground Air on the Northern Line is equivalent to smoking a cigarette. Scientists calculate the air quality to be 73 times worse than on street level, and given that this is a London street (NO2 levels are well over twice the legal limit advised by the World Health Organisation at some sites in London) that’s pretty bad.

As for the noise it is the combination of trains and tunnels again – even ordinary trains sound very loud when they go through a tunnel, it’s a big noisy machine in a confined and amplifying space. We’ve all blown raspberries down an empty gift wrap tube: well it’s the same effect but with metal wheels on metal rails going between twenty and sixty miles an hour. Sound levels of up to 118 decibels have been recorded on the noisiest parts of the Underground, that’s louder than a pneumatic drill, a definitely loud enough to cause some serious hearing damage.

All in all, it’s no wonder I screamed my head off when I first went on the Tube. That said, I love it now, although the fact that I’m not obliged to use it more than a couple of times a year and rarely at rush hour probably affords it a higher place in my estimation that it might otherwise achieve. I love that I never stand on a London street or in a London building and remember that underneath my feet run 249 miles of Tube lines. I love that it’s a self-contained world, loud, hot and horrible, existing below the everyday noise, clamour and horror of London Above. It’s almost a dream-like landscape, the ordinary architecture of nightmares in its utter mundanity, tinted with the memory of terror that’s still just a fraction plausible.

London Transport Museum are running a series of events and exhibitions celebrating the 150th anniversary of the Tube, see their website for details

Poems on the Underground was launched in 1986 after American writer Juduth Chernaik suggested it would be a good way to bring poems to a wider audience. Regular anthologies of featured poems are published, or you can read a poem for the day on the Transport for London site here.