With the road atlas spread out in front of us, I put the finishing touches to the set of complex instructions that my friend and I would have to follow the next morning as we headed south, attempting to avoid a) getting ourselves lost, b) driving into another quarry, and c) Manchester. Despite having looked forward to Yorkshire so much it had not turned out quite as we’d expected. We’d been on the road about two weeks already, and the day’s events had had a somewhat dispiriting effect on us.

‘I hope the Peak District’s good. Derbyshire’d better be better than Yorkshire anyway or I think we might have to just drive straight home.’

With the mention of Derbyshire, there were many ideas connected. It was impossible for her to see the word without thinking of Pemberley and its owner.

‘Of course it’ll be good,’ I replied confidently, ‘Mr Darcy lives there!’ 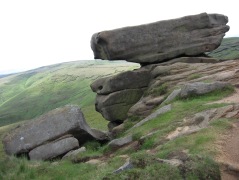 ‘Adieu to disappointment and spleen. What are young men to rocks and mountains? Oh! what hours of transport we shall spend!’

Unfortunately this proved all too true the next day, though not quite in the manner that Miss Austen intended in her beloved text. Having successfully circumnavigated Manchester we found ourselves stuck in traffic for two hours in Stockport on our way to the Peaks.

I reached for the map to see if there was anywhere to pull off.  A country park was marked in less than a mile, so I suggested we stretch our legs and have lunch to revive us for the next stage of our journey.

As we turned into the entrance we found it flanked by surprisingly formal looking pillars.  The drive lead through gently rolling parkland, a herd of deer spreading out through the landscape.

The park was very large, and contained great variety of ground. They entered it in one of its lowest points, and drove for some time through a beautiful wood stretching over a wide extent…  They gradually ascended for half a mile, and then found themselves at the top of a considerable eminence, where the wood ceased, and the eye was instantly caught by Pemberley House, situated on the opposite side of a valley, into which the road with some abruptness wound. 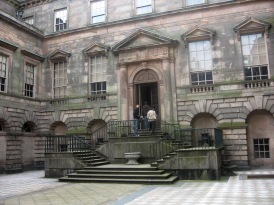 Lyme Park has become one of the most recognisable vistas of an English country house, thanks to the BBC – and of course, Colin Firth in a wet shirt.  For all the jokes, we’d accidentally arrived at the location used to film Mr Darcy’s fictional home in the famous 1995 adaptation. Clearly this required more than just a stroll. After all even Elizabeth Bennet couldn’t turn down the opportunity to go poking round Pemberley, even if she did think its owner somewhat repulsive at the time. Thanks to the National Trust and its cheap membership for those under 26 we were even able to do so for free.

Entering a familiar-looking courtyard we mounted a flight of steps and were admitted to the hall.  Almost immediately a custodian stepped in to prevent photography, flash or otherwise.  Stately homes seem defined by red tape, and in this case red ropes with hanging arrows that funnelled visitors along the preferred route.  Dim hallways were lined with long windows and tapestries, punctuated by finial-legged tables, strategic lamps, and ornaments.  Among the lavish furnishings was an extensive clock collection: tall grandfathers, ticking mantle clocks, chiming carriage clocks; the functional to the elaborate, mostly working, all showing different times.

Despite the house being representational of one that so many people would consider the ideal residence, it felt strangely inhospitable. It might have been grand, but it felt more like a museum than a house. Having been so carefully designed to conform to the idea of aesthetic perfection, and then frozen in time by the National Trust to provide an example of what exactly that would have been like to walk around in was somewhat disconcerting. Stately homes that are open for public viewing are always confusing to me: partly interesting for the artefacts and architecture, some of which is beautiful, some fun to mock because of its over-decorative ugliness, but always at the same time slightly hollow. How different an experience would it have been for Lizzy to walk round a similarly grand house full of expensive furniture, paintings and posh paraphernalia, but one that was of the contemporary idea of what was desirable and stylish, and one that was really lived in?

Lyme Hall was not a house I could live in. I would have liked the run of it, though, with no one to look over my shoulder whilst I peered into cupboards and boxes, opened doors sealed for years, blowing dust from objects of curiosity, pulling those unread volumes off the shelves in the library, finding out what all those rooms really are that we can never get to see. In reality visitors are only admitted to a minute portion of the internal workings. What is in the rest of it? Truly here is the province of fiction, but the potential secrets to be uncovered are, for me, a greater thrill than the romanticism of an Austenite fairytale.

We didn’t stay long, it being an unexpected diversion meant only to be a lunch break.

There was just enough time for a quick photo opportunity by That Lake before we got back in the car. As neither Mr Darcy nor Colin Firth looked likely to appear we left the formal grandeur for wilder riches awaiting in the Peaks. 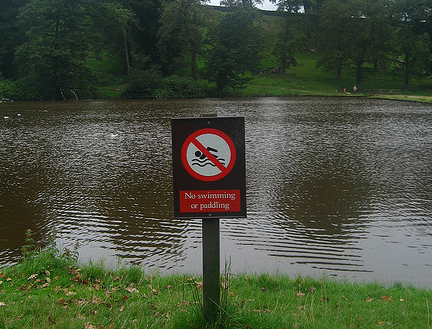 2013 is the 200th anniversary of the publication of Jane Austen’s Pride and Prejudice, from which, for the less than obsessed of you my dear readers, the quotes in this piece were taken. On 27th January 1813 the first published copy of the novel found its way to the author herself.

My friend and I were visiting Lyme Park (which is actually in Cheshire, but still in the Peak District), near Stockport, used for the exterior Pemberley scenes in the BBC adaptation. Sudbury Hall at Ashbourne (actually in Derbyshire) was used for the interior. Both are National Trust properties and for book lovers 2013 will be a good time to visit Lyme Park as an exhibition will be hosted there celebrating 70 years of Puffin, the children’s division of Penguin books who brought us Stig, Spot, and The Very Hungry Caterpillar.

Chatsworth, which is often erroneously believed to be fictionalised as Pemberley, (canny readers will have noticed that Lizzy has already visited Chatsworth with her Aunt and Uncle prior to dropping in on Darcy in his ancestral home) stood in for the big house in both the 2005 movie adaptation of the book and the BBC adaptation of P D James’ Death Comes to Pemberley.

trying, and not succeeding, to write about a plantation of daffodils on the wooded edges of a lake without referencing the literary sister and brother who famously did the same 210 years earlier

65 thoughts on “Pemberley by Accident”