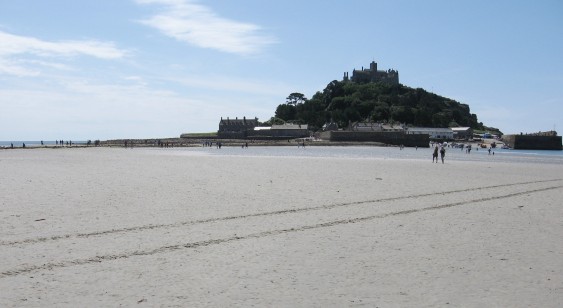 It’s a midweek midmorning in August. The clouds are bolstering darkly over the north coast but on the south coast the sun is shining. The town streets of Falmouth are surprisingly quiet for such fair weather. Judging by the tailback on the A30 westbound between Redruth and Penzance I’d say that’s where everybody’s got to. I’ve spent the past couple of days staying with visiting family at their friends’ place just north of Redruth and experiencing the locale from a visitor’s standpoint. Right now standpoint isn’t too far off the mark as it’s taken us an hour to cover the sixteen miles between their house and Marazion.

I can’t complain about tourists. Well, ok, I ought not to complain. It can be hard when you need to get to the supermarket and back and have time spare to eat during your lunch break but are forced to weave your way along the high street against the flow of what appears to be a seasonal zombie apocalypse of brainless, lifeless, ambling bodies that seem unaware of anything outside of their own small sensory sphere. Then I remember how my hometown’s economy is supported when the students have departed for the summer; how the wider regional economy is supported outside of the fishing and creative industries (ie, how it is supported Full Stop); essentially what and who are paying my wages and allowing me to continue loitering about in a part of the country I fell in love with half a lifetime ago and contrived to move to when I could no longer stand being in such close proximity to Bracknell.

The council have recently removed ay roadside parking on the shoreside stretch of Long Rock Road, opposite Marazion Marsh, widening the pavement and probably slightly increasing their carparking revenue, although given the lateness of our arrival and the sheer number of people that have already gravitated here I doubt very much if we’d have been able to stop there anyway. We end up at the very top end of the overflow field to one of the private carparks. Making our way towards the seafront we muse between us just how many cars they’ve managed to pack in, and at £3 a day, just how tidy a profit a minimum of 600 cars would yield. Of course this is a warm day in August where parking mere paces from one of the longest stretches of amenable sandy beach on the south coast is possible. This you have to make the most of if you’re going to make a living down this way at all.

The tide is about as far out as it’s going to be exposing rocky outcrops and warm, shallow puddles in the flat sand expanse between the mainland and the tidal island of St Michael’s Mount in the nearside of the bay. A granite paved causeway exposed or covered depending on the tide runs from Marazion out to the Mount, but we’re far enough over to cut the corner across the beach and shorten the walk.

A girl is sitting on a rock in the middle of the sand and painting her toenails. We ford a mini tidal-channel running from Chapel Rock to the shallow remains of the sea out by St Michael’s Mount harbour. A digger is busy removing sediment from the western edge of the Rock: when the tide is higher, but the full area between the Mount and the mainland is not yet flooded the ferries taking visitors who can no longer cross the submerged causeway drop them off at Chapel Rock. Usually the tidal action and the constant use by landing ferries keeps the channel deep enough but heavy rain and higher tides over the past couple of days had silted the channel up more than usual.

An ant-line of visitors streams across the causeway. The island looks unsurprisingly busy. Welcome to Cornwall in August.

I like living in Cornwall. It really comes as no surprise that other people who don’t happen to live here also like it. I discovered the area when on holiday here so it also comes as no surprise that there are around 5 million others who do the same each year. Just as it is unrealistic, self-important and overly romantic to expect wild places to be kept wild and inaccessible to anyone but yourself whilst you are there the same has got to be said for those attractive and enjoyable parts of the country that are popular as visitor destinations. It is also worth bearing in mind that if everyone who visited and liked it decided to move here it would be as different a place as if no one were to visit at all. People make the places what they are, and if we love those places, we have to factor in those people.

The crowds are punctuated by high pitched children and German accents. Apparently the popularity of Rosamunde Pilcher novels is to blame (I mean thank) for the huge increase in German tourism to the south west. We headed up the uneven stone steps to the castle and priory at the summit. It’s only people that have to endure the walk up: there’s a hidden underground tram route for goods in right from the harbourside to the inner of the castle. I can’t be the only person to wonder what it would be like to ride on. I had remembered the path as being a steep and hard climb previously, more arduous thanks to the uneven boulders of the steps, maintained in their traditional form by the National Trust to recall the original pilgrim route to St Michael’s priory. I suppose living half way up a road that crosses five contour lines on the map in a relatively short distance has got me into good practice and I was at the top before I was out of breath.

Ducking through the doorway to the inside I was struck by the noise of children and the sheer number of people that had managed to squeeze themselves in to such a small room. I wondered if it would be like this all the way round, and whether we’d only be able to get a good view of the ceilings. Luckily the backlog by the front entrance seemed to thin, although the custodian in the Chevy Chase room was having a hard time dissuading children from completing their History Quizzes on the expanse of the old oak refectory table. My Dad wanted to know how they’d got it in round such a tight corner and through such a small door. Apparently it had come in from the courtyard on the other side. We emerged onto the rooftop – reversing the table’s entrance route – to hot sun, a strong sea breeze and wide views back across the bay from Mousehole and St Clement’s Isle to the west, then Newlyn and Penzance, back across the beach – already significantly reduced by the incoming tide – to Marazion, and east to Cudden Point and then the Lizard. The sea was jewel bright over the sand and rocks and any clouds had receded north leaving a sky the colour of the agapathas flowers on the terraces of the castle’s sub-tropical gardens.

Into the shade of the chapel where a half-remembered tale of a secret bolt-hole beneath the floor was fleshed out by the custodian. During renovations some years ago the altar had been moved from its temporary  position at the side of the chapel and a hidden door was revealed behind some panelling. It lead to an underground chamber that concealed the skeleton of a 7ft man and an empty pitcher. Legends of the Giant of St Michael’s Mount are numerous (his surprisingly little stone heart is embedded in the pathway half way up the hill) but nothing is known of this larger-than-average being who either met his death in the hole, or whose body was concealed down there. Was he imprisoned with only a pitcher of water to sustain him until he was forgotten about? Imprisoned because he was abnormal – a giant? Or was the pitcher actually filled with wine, and he holed himself up down there to enjoy it but became so inebriated he couldn’t make his way back out again, or perhaps fell, and died in blissful ignorance? Whoever he was, he now rests in an unmarked grave in the churchyard at the bottom of the Mount, and the secret chamber, which was open to the public until a visitor slipped on the steps, has been resealed.

Due to the castle’s continued habitation by its ancestral owners the St Aubyn family there are only limited parts of it viewable. The Lady Chapel that was converted into a high gothic revival drawing room during the 1750s boasts a sofa that seated Queen Victoria when she dropped in on the St Aubyns for a surprise visit during a trip to Cornwall (they were out at the time) and looks like it hasn’t been sat on since. The rest of my party thought they’d lost me when I got distracted in the map room. I caught up with the others at the exit, where fully completed Children’s History Quizzes were being rewarded with pirate medals.

The tide was coming in rapidly and already the middle of the causeway was covered, though not yet deep enough to dissuade some hardy or foolish attempts to cross on foot. By the time we had descended the pilgrim’s path to the harbour the water was much deeper and a relay of boats was ferrying passengers from the quayside to Chapel Rock. We boarded and set off and the boatman had just collected up everyone’s fares when he did a sharp 180° turn back towards the island – now more justifiably an island being now surrounded by water – and cut the engine. Can’t go too close so as not to swamp her – he was saying, as he leaned over and grabbed a five pound note that had blown out of his grasp and stuck flat – invisible to the rest of us – on the surface of the sea. I’m sure it is really for eventualities such as this that British ‘paper’ money is made of cloth.

Back on shore we arrived in time to catch the finishing touches being put to a giant sandcastle version of St Michael’s Mount by a local DIY Summer School. They’d built a mound of sand with a trench round the rim, sandcastles on top for the priory and castle, a harbour, a causeway faced with pebbles, and the gardens and woodland made of seaweed and umbellifers stuck into the sides of the mound. Not much longer and the tide would be swilling in around its base to make it look even more realistic. 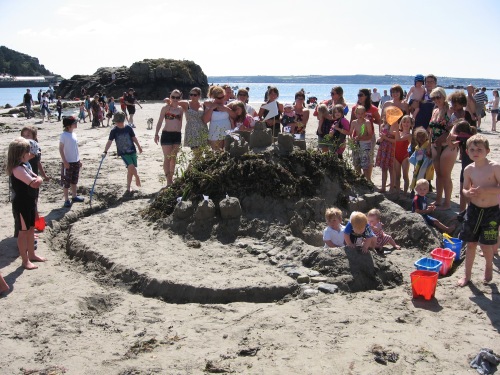 We strolled back west along what was left of the beach, chose ice creams from a limited list of flavours depleted by the masses, and eventually wound our way back to the car at the top of the now less-packed parking field.

The homeward journey took us 18 minutes. Or it would have done if we hadn’t, as all good tourists should at some point during their trip, missed the exit off the A30 because the passenger with the road map was resting their eyes after an exhausting day trip.

The tidal island of St Michael’s Mount possesses a rich history and mythology covered in much detail elsewhere. A brief starting point is the island’s website: http://www.stmichaelsmount.co.uk/

The Mount is owned and managed by the National Trust, although the St Aubyn family still live in the castle, and is open to the public from Sunday to Friday, with the gardens open fully during June, and on Thursdays and Fridays the rest of the season: http://www.nationaltrust.org.uk/st-michaels-mount

for more on Cornwall’s enduring appeal, its compelling landscape and tangled folklore and history, and how I got here in the first place 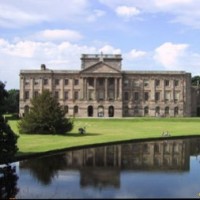 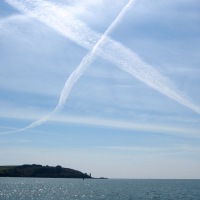