It is low tide. The upper beach is slimed with green algae, slick to the rocks and slippery, after ten rainy days in a row. Enteromorpha, I note in my book, reassured at the ease with which I can recall names I’d thought I’d forgotten. I’m attempting to map the shoreline by tracing the less definable perimeter where  the sea and land meet ecologically.

Anywhere that two different habitats converge is marked by changes in flora and fauna. Often a transitional area will include elements of both habitats, intermingling in subtly increasing and decreasing abundances. On rocky shorelines like this one, this ecological zonation is clearest in the seaweed populations.

At the high water mark the first of the brown algae, Pelvetica canaliculata or channelled wrack, is identifiable by its grooved stems or ‘stipes’, like weedy seawater canals in miniature. Initially baffling Latin tags make sense on closer inspection: Fucus spiralis, spiralled wrack; F. vesiculosis, bladder-wrack with its bubbles or vesicles; and F. serratus, with predictably tooth-edged blades. The nodular, ropey Ascophylum nodosum or egg wrack sounds to me like it should be a shelf in a fridge door.

Here in a tide puddle like drowned salad, is a patch of leafy green Ulva lactuca, bubbles rising furiously in the brightening sunlight. This is photosynthesis in action. Phyco-phobics should bear in mind that marine algae provide over half the oxygen in the atmosphere as a waste product of their own livelihood. The oceans are as valuable carbon sinks as the dwindling tropical rainforests, yet people still have the audacity to be offended by seaweed.

Moving down shore the wracks pile up, crisping to an oxymoronic mixture of crunch and slide underfoot. The top layers have crusted in the sun, blackened and rubbery; underneath is protected, stewing in its trapped moisture, waiting for the relief of a wave. Intertidal habitats provide some of the most arduous living conditions on earth. Organisms adapted to this harsh environment deal daily with stress levels that make merchant bankers’ lives look like a stroll on the beach. Not only do they have to deal with inundation and desiccation twice daily, but also hugely varying temperatures in the shallow tide pools, fluctuations in salinity, and exposure to aerial predation during low tide. Some of these changes can be extremely sudden: think of a rockpool that’s been reducing to shrimp bouillon all afternoon in the sun, instantly cooled by as much as 11°C by an incoming wave. 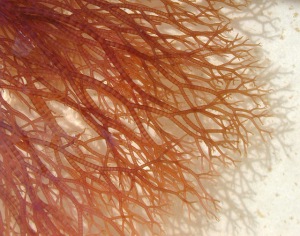 As I progress to deeper pools I begin to find red algae: delicate specimens, prettier, more susceptible to disturbance and change. First to appear are the calcareously lilac Coralina; and the mossy Ceramium rubrum with strands like a string of beads and the tips of its filaments like tiny pincers. Hiding amongst the sturdier wracks is a little cluster of Chondrus crispus, which, when submerged, has a beautiful iridescent sheen over its red leather fronds.

Seaweed falls into three categories: greens, browns and reds, which in turn are found in different sections of the intertidal zone. Green algae, the Chlorophyceae, predominantly occupy the uppermost limits due to their tolerance of lower salinity levels – hence the greater abundance of these where the rainwater run-off had washed over the upper beach. Phaeophyceae, brown algae like the wracks, are found mid-shore onwards; and reds, Rhodophyceae, are found in the low shore to sub-littoral areas. Originally it was thought that this was because red light can only penetrate the uppermost surface of the water, allowing rapid photosynthesis in green algae; whereas additional pigments in brown and red algae allow them to use the blue and green light which penetrates deeper into the water. In fact light quantity, rather than quality, is a more limiting factor for underwater photosynthesis as more than ten percent of sunlight is reflected by the sea’s surface. Even in totally clear water strong light can only reach a few metres at most, with 50m being the absolute limit of the photic zone. In deeper oceans brown seaweeds like those of the Sargasso Sea grow to tens of metres in length to best take advantage of the little available light. Although there are no such things as sea trees these algal giants are the closest marine equivalent.

As I near the now incoming sea the wracks become thicker and more abundant, beginning to emulate their Sargassan cousins. Now kelp rises ominously on the approaching waves: a spaghetti soup of thongweed, and the waving bracts of Laminaria digitata’s giant rubber gloves. This is as far as I can walk if I want to keep my boots dry, and however much I defend seaweed I’m not a fan of wading unawares into a swirling mass of kelp.

I think this is what most people’s objection to seaweed revolves around: fear of the unknown as you plunge into the depths – what could be hiding beneath after all?

This extract was taken from a longer article which appeared in Peninsula magazine 2011, produced by myself and my fellow students during our MA. An online version can be accessed here

For more information on the pictured seaweeds, click the images for links.

For some great seaweed photography and to prove that seaweed really can be interesting to look at take a look at this blog: http://natureinfocus.wordpress.com/tag/seaweed-textures/