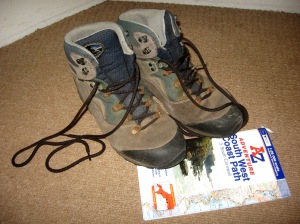 My walking boots have nearly had it. The eyelets have rusted to the point that they effectively chop through any laces I manage to thread through them. They’re still pretty comfortable but my slight tendancy to lean into my instep has worn the rubber heels down at a funny angle. It will be the first time in months I have ventured out walking without my wellies, but after nearly a week with no rain I’m hoping the months’ upchurnings of mud will be navigable.

Bag is packed: binoculars, camera, thermos of tea, pen and pencil, waterproofs, sunscreen, some sort of lunch. I’ve even managed to find a new blank notebook (surprisingly difficult). I’ve consulted the walking guide, checked out the map and filled my tiny squirrel Tupperware with nuts and raisins. Checked the weather forecast. Not that it would stop me going. I decided when I chose to set out that I’d never accomplish it if I only waited for dry days. This is Cornwall. To wish it to be other than it is would defeat the object of the venture.

Cornwall is the object. And the subject. And the verb? To walk. To wander. To wind my way, step by step, one foot in front of the other, and see Cornwall in its entirety, from the outside at least, and to draw from that whatever I may. Starting at Plymouth, where I will embark on a ferry crossing from east bank of the River Tamar to west, I will start walking, and over the course of the next few months make my way west along the south coast, circumambulate the cape and travel east along the north coast until, 300 miles later, I will hopefully reach Marsland Mouth, a couple of miles north of Morwenstow where a small river enters the Atlantic Ocean and marks the official county boundary.

Why? Because it’s there. Because I can. Because I’ve always wondered what it might be like to walk the whole coast of Cornwall and because more recently it’s evolved from an idle wondering to an inherent want to at least attempt it. And why not? There is not really any reason not to, and I consider myself quite well-placed to do so seeing as all I really need do is pull on my boots, shut the front door behind me and walk for about 15 minutes to reach the Coast Path. What’s to prevent me setting off and not turning back until I’ve done it? I’ve had Bilbo Baggins quoted at me more times than I’d like to recount in the course of explaining what I’m about to embark on:

He often used to say there was only one Road; that it was like a great river: its springs were at every doorstep and every path was its tributary. “It’s a dangerous business … going out of your door. You step into the Road, and if you don’t keep your feet, there is no telling where you might be swept off to.”
-‘The Lord of the Rings’ – J.R.R. Tolkien

Besides, there’s no time like the present, and if my knees are creaking this much when I’m only in my mid (well, ok, late) twenties then if I don’t set off now I might never make it! Also I was feeling a bit bored and unmotivated so a little expedition seemed like just the thing to get me onto my feet – literally.

I’ve never done any long distance walking before, having been put off by the hikers I’ve met on my travels weighted down with their livelihoods on their backs, their possessions pared down to the meanest and lightest possible, one couple I met at the top of a mountain in the Lake District had even cut their toothbrushes in half – “every ounce counts!” they said. However, with a careful combination of public transport and a support team of drivers I am taking advantage of the fact that I live within an hour and a half’s drive away from any of my potential stop-off points. Which basically means I’m going to owe a few people a lot of petrol pounds (£) an several pounds (lb) of cake, but will ultimately save about a grand and a half in food and board and baggage transfer (having decided against carrying all my worldly goods in a back-breaking rucksack). I will also have the advantage of flexibility in my agenda: I will be able to curtail my day’s route should I not be up to it, or my shoes break, or my blisters burst, or I slip over on a cliff and land in a gorse bush and puncture a vein in my wrist (not funny, did happen: Portholland, 2007. There was blood. Lots of blood).

And I know I said I’m setting out whatever the weather but if it’s seriously pissing it down and not likely to let up the entire day I will have the option of crying off. Or if I just want a rest. Or have to go to work. Although I intend to use a sizeable chunk of my annual holiday allowance in order to accomplish as much of my mission as I may I’m setting out sooner than I originally intended and taking advantage of any large gaps in my winter shift pattern to get in some mileage. But the rent must be paid, and the petrol kitty must be added to, and even taking advantage of various discounts for members of the South West Coast Path Association at the outdoors shops a new pair of boots will still set me back considerably more than I was anticipating.

The South West Coast Path Association is a charity that represents those who enjoy the 630 mile stretch of coastline between Minehead in Somerset and Poole in Dorset. They work to campaign for the best possible standards for the route and its immediate corridor, to provide help and information for walkers and to assist financially where appropriate to ensure the best experience for all those using the Coast Path. For more information visit their website here.

The Rituals We Choose
in which I followed the coast path from Durgan on the Helford to Falmouth on 1st May 2013 and documented my path with a photostory captioned by quotations from Thomas A. Clark’s beautiful poem ‘Riasg Buidhe’

3 thoughts on “Coastlining: A Dangerous Business”