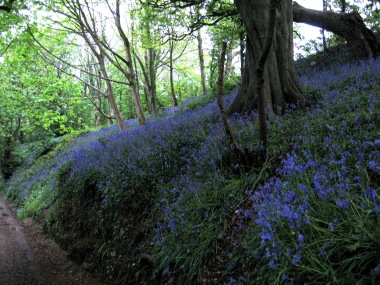 I leave the house half an hour before sunset and walk through the quiet residential streets of Falmouth town and up onto the headland that curls out southeastwards into the Fal Estuary. The road passes high above the docks which shelter in the northern lee of this spit of land where the water is deep, tidal and yet protected from the moods of the open sea.

Semi-submersible naval vessel Mount’s Bay is alongside the outer wharf, a P&O ferry in one of the dry docks. Cranes at the ends of their runways. The old brick red and triangular-roofed Victorian dock buildings, like a cardboard cut-out flat-net set piece for a model railway. The brand new metal framed box of the Pendennis Superyachts building. All sounds and machines, angles, metal, blast hosing, welding and hammering. Steel toe-capped boots and Polish accents. Work around the clock to catch tide and time. Tall masts of a very new and swanky superyacht in the marina.

There’s not going to be a sunset, just a slow decreasing of the light until night. The lighthouse is already alight on St Anthony Head on the other side of the river mouth. I fork left off the road that circuits Pendennis peninsula onto the footpath that follows the same route further downslope through the woods. In the dimming light the thick carpet of bluebells covering the bank between the track and the road takes on an eery luminescence. Their perfume seems amplified in the dusk. Amid the blue carpet white flowers pick up what little light remains: stitchwort, tri-cornered leek, wood anemone.

Out to the Point, where the Little Dennis blockhouse sits right out on the edge of Falmouth’s finger-tip below the castle up on the height: Little Dynas – little castle and Pen-dynas – castle of the point, peninsula-castle. Looking southwards and out to sea from the lower ramparts I spot the pilot boat scarring a white wake on the dark water as it heads out to what looks like a floating city: four, five, six huge hulks of shipping out in the bay awaiting bunkering, all lit up like a Christmas street.

I continue round the southern side of the promontory, heading west again by road, the sky banded and blurred like a watercolour. I pass the wooded slopes below the castle to my right, the little paths that drop down to fishing spots on the rocks to my left, the motorcycling memorial, the picnic spot, the parking spaces where there’s almost always divers in some state of getting in or coming out; back towards habitation. Past the apartments with the glass fronts and panoramic view that cost as much as five bedroomed rural cottage further inland; and then hotels along the promenade. The half moon makes an appearance between the clouds, but no stars. I make do with the sulphur spots of the streetlamps mirroring the shiplights’ spangle out in the bay.

At Gyllyngvase Beach I go down onto the sand. The concrete steps have been foreshortened by the heaping up of sand at the seawall during the winter’s storms. The bottom flight of steps has been swallowed where there used to be a considerable step down, and the handrail disappears into what is now ground level. There’s some debate about the authenticity of the sand on Gylly, as the upper beach is often dusty and white and leaves a chalky residue on the bottoms of your feet that makes the tops look really tanned. It’s a raked beach: often blanketed in slippery heaps of kelp during the off-season that are heaped to one side during the summer. I tread the intertidal sand that’s genuinely washed in and out by the sea. It’s too dark to see my footprints but the invisible reality is that they’re all over this beach. Though hardly the nicest beach in Cornwall, or even my favourite within Falmouth, it’s loaded with memories.

A tarmac path leads up over the clifftop for the short walk to Swanpool Beach. It’s dark by the time I get there. The hawthorn is in flower at the pathside, glowing softly in what little moonlight there is. This beach was once the outlet for the river flowing down the valley from Budock and Mongleath on the west of Falmouth’s townspread. As sand and shingle built up a bar formed across the cove, gradually closing off from a spit to a beach and only breaking through in heavy storms. As the bar grew wider and deeper it grew more permanent, and the river mouth became a pool trapped at the back of the beach. A sluice was constructed to allow the river outflow to reach the sea and to prevent flooding. During high tides the sea comes up through the sluice and resalinates the pool, creating one of only eleven brackish water sites in the UK and allowing, despite its fairly ordinary appearance, for Swanpool’s SSSI designation.

There is little visible sign in the darkness of the wildlife that makes Swanpool its home as I walk along its banks back up into Falmouth towards home. A coot or two pipes away. A bat flits over my head. Duck-like noises on the water. There is sand on the verge from where the beach migrated up over the road last winter. Another bat – or perhaps the same one – loops deftly overhead. No, there’s definitely more than one: as I stand by the water’s edge more and more appear, flitting to and fro and around my head and over the surface of the water. Too fast to see, really; hard to watch, but I can almost feel them as they move around in a well-choreographed cloud clicking and squeaking and finding their way by sound, mapping out the landscape with me in it. The last of the dusk dyes the pool inky blue, the sky between the clouds lightening at the north-western horizon. And yes, there is a star, and there another, in the break in the clouds.

In the spring of 2014 I set out to walk the coast of Cornwall. I started at Plymouth, crossed the River Tamar, which separates Cornwall and Devon, and began walking west along the south coast of the most south-westerly peninsula of the British Isles, and then east along the north coast until, 300 miles later, I will hopefully reach Marsland Mouth where a small river enters the Atlantic Ocean and I will step back into Devon.

Why? Because it’s there. Because I am here. Because I can, and because I want to.
What will be gained from the expedition? Unquantifiable experiences, an unimaginable amount of mud on my boots, clothes and face, and probably several thousand photos of sea views, rocks and flowers.
Other than that, who knows? Watch this space

A series of articles that link together to form an extended piece about the tidal section of the River Fal in Cornwall. In it I imagine what it would be like to start at low tide at the river mouth, travelling upriver to the highest tidal point at high tide, and returning back to the sea, by exploring the locations on and around the river and making my own ‘tidal journey’ inland and back out to sea. There are thirteen parts to the series.                                          Part 1, starting on Pendennis Point, can be read here.