Five lambs in the hedge – one all black – beside the road as I make my way with Annie and her dog towards the most southerly point in mainland Britain. The Lizard lighthouse nestles in its cluster of buildings on the tip of the land, white against a pale-clouded sky. One chough flies overhead: fingered wings, sickle bill. Late May millefleur in the hedge banks. The road leads right off the edge, down the slipway to Polpeor Cove’s redundant lifeboat house. Even at half tide it’s easy to see what a treacherous place this is for a lifeboat to be stationed – both as to why it would be so needed and why its relocation was deemed necessary. A crust of rocks pocking the still surface of the sea, immersed and emersed, barely a navigable stretch between their dark shapes. Underfoot the mud of the path is a bricky pink-brown, a hint of the red and green marbled serpentine rock underneath it all. I used to think the Lizard peninsula got its name from its unique bedrock and was slightly disappointed to discover its corruption from the Cornish lys-ardh, ‘high court’ rather than its serpent-skin geology.

Thrift pillows hedging the periphery. A confection of pinks – sea pinks, early summer pinks. Heath spotted orchid, sea campion, scurveygrass: a delicate but hardy edging to a tough coast. Black rocks offshore, sharp cliffs and chunks of island. A landslip just missing the edge of the path. A carefully placed stone, one polished face engraved with a memorial text, the rest left rough and placed in with the stones of a hedge intersecting the path. Anne came this far from Poole on the SWCP. Alan, Gill and John carry on in her memory. What happened to her that she couldn’t carry on? Did her friends, or family, or companions – her memorial walkers – ever make it to Minehead? So many stories written into this walk that can’t be read. So many memories building up with the wearing away of the path. 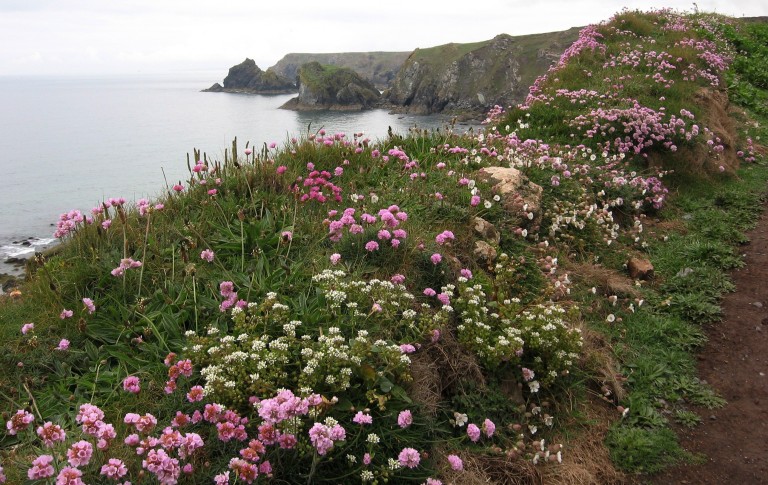 The steps down to Kynance Cove are slippery. Recent rains have gritted the path with run-off from the surrounding heath and fields. Annie helps an old lady who’s struggling to admit she’s struggling. Down in the cracks and corners at the bottom of the cliffs, the cove is a hidden crevice between the shore and the island rocks accessible at low tide. A slew of pebbles bank the marbled cliff foot – beads, eggs, ostrich eggs, boulders – richly coloured with the wet of the sea in a yule-toned spectrum of garnet-emerald-malachite tones, blood red, lime green, blacks and purples.

We stop for tea at the cafe. Luna the whippet drinks some of our milk. We’d planned a fairly short and non-strenuous walk this time for several reasons. After accompanying me for just short of 10 miles between Mevagissey and Portholland and finding it a bit too far, then following this with a bout of ill-health, Annie is keen to ease back in to the more strenuous coastlining quite slowly. We were also planning to head down to Penzance in the afternoon for the May Bank Holiday world record attempt to get the most people dressed as pirates in one place so had to factor in time to get back from the end of the walk and pirate up before heading west. Thankfully we’d decided against walking in our pirate clothes – many layers are good for seafaring but on land prove a little warm. Even under the day’s cloud cover I’d already de-layered, only to have my vest top purloined by Annie who had misjudged the temperature and worn a thermal top and jumper. Mindful of my pink shoulders after walking from Coverack under an overcast sky I smear sunscreen on my exposed arms and face whilst we are stopped,  despite Annie’s protests at how cloudy it is and how she doesn’t need any. 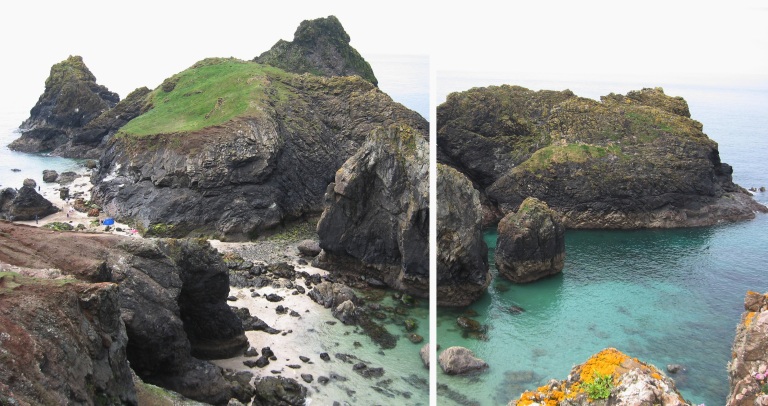 Up from the tiny cove valley and one of us over-trusts a patch of mud in a cattle-trampled stretch of clifftop and ends up encasing their entire boot when their foot sinks much further than expected. For once it’s not me. It’s an easy walk along the clifftops of Predannack: flattish short coastal grassland bobbled with boulders, verging the wider expanse of the Lizard’s heathlands. Perfect ‘grazing’ for choughs, who use their curved beaks to dig for insects in the short sward, but we don’t see any more. One or two stream valleys cut down through our pathway, each cleft with a cascading rill descending in waterfalls to the sea below; each slope lined in winding paths of desire lines where many feet have followed three of four inclinations of down and up. I’m well-conditioned after the steeper, deeper ups and downs between Polperro and Polruan, Charlestown and Mevagissey to think much of these, though Annie’s face visibly falls as we approach the second of them at Predannack Wollas.

Considering how gentle the cliff top walking was we weren’t making as good a headway as either of us was hoping. Generally I stride whereas Annie, despite having longer legs than me, strolls; although my average coastal walking speed is frequently reduced by my attentive bumbling – I’m always taking photos and writing notes and looking at the flowers and the rocks and the birds. We are both beginning to worry about the time when Mullion Cove becomes visible by its white hotel on the headland and the flat wedge of the trefoil-shaped island just offshore. We follow the curve of the coast. Overhead a bank of cloud like whipped egg whites follows the coastline too, casting an iron-grey lid over the land whilst we on the brink are blue: blue sky, blue sea, even the air heavy with the scent of bluebells.

Mullion Cove looks a good place to be spending the afternoon pottering about. There are families down at the water’s edge on the grey beach of the harbour, boys on the quayside, a flotilla of red kayaks within the sheltering pincer arms of the harbour. It’s another small, National Trust owned crevice of coastal heritage – less cottagey than Cadgwith (less fishy too), less populated than Polperro, just a small collection of houses following the line of the valley down to the scenic harbour. The hotel on the headland is almost as big as the entire village put together.

Ascending the path towards it we regain phone signal and I try to get a taxi to meet us at the next hotel along the coastline from the Mullion Cove Hotel without knowing its name. It gets a bit complicated: the person on the other end clearly thinking we are tourists by the way they are attempting to explain that Mullion and Mullion Cove are different places. In the end I just tell them to come pick us up where we are and we sit on a bench by some canon at the edge of the cliff to eat our cheese and pickle sandwiches and enjoy the bright vista across Mount’s Bay towards Gwennap Head and the edge of the world.

It is only when the taxi finally arrives that we realise how lucky we’d been with the weather. Apparently it has been torrential rain inland. Flash floods in the lanes, the St Keverne stock car racing called off because the drivers couldn’t see out of their windscreen for the amount of water being chucked down. So much for that dramatic skyline we’d been looking in on from the edge. Then it is only when changing our outfits for something more piratical in the car park at Lizard village that Annie realises just what sort of effect the finer-than-it-seems weather has had on her unsunscreened skin by the clearly defined shape of my vest top outlined in lobster pink after she’s swapped it for her pirate corset. Fortunately we both remembered to bring our frock coats in the car so when we finally do get rained on, albeit briefly, on arrival in Penzance we stay both dry and in character.

In the spring of 2014 I set out to walk the coast of Cornwall. I started at Plymouth, crossed the River Tamar, which separates Cornwall and Devon, and began walking west along the south coast of the most south-westerly peninsula of the British Isles, and then east along the north coast until, 300 miles later, I will hopefully reach Marsland Mouth where a small river enters the Atlantic Ocean and I will step back into Devon.

Why? Because it’s there. Because I am here. Because I can, and because I want to.
What will be gained from the expedition? Unquantifiable experiences, an unimaginable amount of mud on my boots, clothes and face, and probably several thousand photos of sea views, rocks and flowers.
Other than that, who knows? Watch this space.