view from the fields adjacent to the A3078 between St Just and St Mawes, looking across the Carrick Roads towards Falmouth, Trefusis and Mylor 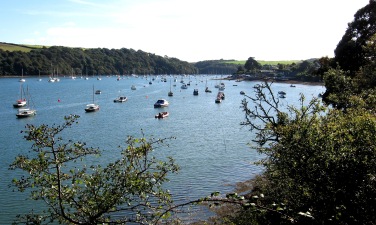 October’s here. Let’s dress for the weather – you’ll need that scarf. Bright is the blue of sky and sea and creek; fat are the clots of cloud like overwhipped cream piled up over the inland sky and far dispersed to the distance over the coast. Too bright the colours; too sharp the shadows. Not yet the autumn glow; not yet the burnished trees and crunch of leaves and sharp tang of a crisp bright day following the first frosts. Put those sunglasses on. And when I said bring a scarf I meant that lightweight summer shawl to drape over the shoulders when the sun’s so strong on your back that you can almost feel the freckles coming back out and are slightly regretting your choice of black t-shirt.

Not yet the autumn winds getting in at the edges. I’ll concede the season its berry beaded hedgerows, its teasel combs and umbellifer frames browned and dried, the hydrangea heads self-preserving themselves into sepia tones and the blackberry pips between my teeth. But here are red-hot pokers naturalised glowing spears as if the autumn flora’s conducting the heat of the afternoon. A cowpat comes alive and disperses its crust of flies as I pass. A cudding cow has a corresponding cloud around its head. The flowering ivy’s buzzing like bad electrics and smelling like an imminent sneeze.

River beach and a seaweed stink pile from the over-high black moon tide. Offshore the bobbing head of a seal enjoying the sunshine. Or maybe just a buoy nodding away on the ebb tide. Net floats strung on a fence at the boatyard, their orange globes a maritime substitute for pumpkins. Two egrets and a heron spear-fishing in the tide-drained harbour. In the churchyard a songthrush flicking through leaves and jabbing for grubs, a side-eye on me and my packed lunch on the bench just that little bit too close to her.

Close the gate. Keep dogs on leads. Beware of uneven pathways. Keep to the paths unless seeking a specific gravestone. Cross the threshold into another world. Rest in peace. Riposa in pace. For all the boundless universe is life – there are no dead.

And did those feet in ancient times walk upon England’s mountains green? Or wander in Cornwall’s gardens green: a-flush with life and growth and gunnera umbrellas, palm tree and monkey puzzle a curious counterpoint to headstones and epitaphs. But the church wouldn’t have been here then, the sub-tropical setting a futuristic foible, a thought so ridiculous as now is the suggestion that a tin trader from Arimathea brought his great-nephew here as a boy during those lost years barely mentioned in the good book before he grew up and went into carpentry, water walking and mass catering.

The high road for the return and field footpath with a view from Goonhilly to Greatwood, the sea at the Fal Mouth a-glitter in the sunlight. Rosehips the size of  crabapples share the briar with a late single whorled and heady-scented rose. Smells like summer, looks like October. Cut across and down through a wooded lane and a descent that feels like it should be taking me inland and away from saltwater not back towards another finger of flooded river creeking its way into the countryside. Epiphytic ferns on a horizontal branch turfed with a sleeve of moss. Caw-vid soundtrack and kew of an unseen buzzard. A boat moored in the rising river tide has a kite in the shape of a kite tethered to its stern. What came first the kite or the kite? The raptor or the lift-and-drag craft? Filtered light through a leaf-lens canopy both at odds and at one with the rivermud-seawater scents seeping up from the creek. Like salted toffee it’s two things that shouldn’t go together but enhance each other, making a flavour in which both tastes can be discerned but is distinctive in its own right. Muddy boots and a clear head. Summer still October.

I took the ferry from Falmouth to St Mawes, followed the Fal north to St Just in Roseland, then went back via Bosloggas and Percuil Creek to St Mawes. For more information and for other walks long and short (this one claimed to be 3.5 miles but felt longer, perhaps from the variety of terrain and surroundings):
http://www.falriver.co.uk/things-to-do/walking/st-mawes-and-st-just