Rain was spotting as we descended from the summit of Glastonbury Tor. By the time we got back into the town it was raining properly, presenting the conundrum of where to eat lunch. I suggested we had for the abbey, much to the protestation of Cee who was convinced they wouldn’t let us eat sandwiches inside the abbey despite my attempts to persuade her that it would be more ruins than anything else. The trouble with ruins is, though, that there’s not much shelter from the rain. We found a bench under a tree and got dripped on eating our sandwiches. It felt a bit like being on a school trip. I kept thinking about that scene in the movie version of Alan Bennet’s The History Boys where they visit the remains of Fountains Abbey and discuss the dissolution in situ:

For a long time I didn’t quite make the connection between the abbey ruins I’d seen and visited around England and the Dissolution of the Monasteries. I think I just thought they’d fallen into disrepair over hundreds of years. I’m not sure when I realised they were razed to the ground because Henry VIII said so but it was surprisingly recently. Ruins are such a part of the historical-cultural fabric of the English landscape that growing up and experiencing their presence, which seems almost organic, within the countryside that surrounded me I just didn’t really question how they’d got there. They were old, they were ruined. Old things fall apart. Old buildings fall down. Centuries are a timescale almost meaningless out of context. A hundred years, two hundred: I think until you’ve lived through at least a couple of decades there’s not really a sense of scale as to how long that realistically is, and what that timescale really means. And why wouldn’t something that old that has been uninhabited and out of use for several hundred years not be a ruin? Of course the question really is, why were they uninhabited and out of use, and how did that happen.

It’s hard looking at the remaining walls and stumps of pillars to imagine a whole structure, even after seeing pictures and virtual reconstructions. When I think of visiting the existing abbeys and cathedrals – Canterbury, Exeter, Westminter, any of them – I find it difficult to reconcile the size, the grandeur, the artistry incorporated into those buildings with the fragmented remains of places such as Tintern, Waverley, and Glastonbury abbeys and how they too were once as magnificent. It’s harder still to then imagine someone giving the order to just get rid of it all. Imagine if the government today issued an order of that magnitude and severity. The millennials would be revolting. Of course it was not just the buildings that had to go, it would have been the livelihoods of so many people. What happened to them? Who got all the money from the goods and the looting of the buildings?

I got the answer to many of these questions fairly promptly, as after Cee and I had consumed our washed-out packed lunch we headed for the remains of the Abbot’s Kitchen (fortunately still roofed) to catch the second half of a talk by a costumed tour guide. Turns out the whole dissolution thing was much more complicated than Henry VIII taking control of the church away from Rome. Perhaps if I’d paid more attention in history class in school I would already have known this. As anyone familiar with this blog might already have guessed I chose geography over history as my GCSE option but I became interested in history pretty much as soon as I left school. Now I regret not studying it in more detail, although I am fortunate enough to live in a society and point in history where information could not be more available.

The monasteries held a huge proportion of the wealth of the country. England was almost continually at war with France and the crown needed cash. By disenfranchising the church the crown could claim that wealth. So it began with an audit of the abbeys and their holdings. Abbeys with the fewest monks, like Tintern on the Welsh border, which apparently only had nine, were disbanded first. The land was sold off, the treasures taken and sold, the furnishings, the artefacts. The servants were dismissed. The tiles taken off the floors, the lead from the windows. Livestock was sold. Lead taken off roofs. And once the roofs were gone the ruin accelerated. Stonework was plundered for local building work. Some sites were torched. Glastonbury Abbey was dynamited to get at the filler within the stone walls, maximising the usability of the reclaimable materials.

And so it continued, starting small, escalating in scale, gradually amalgamating monastic communities and redistributing the wealth and lands of the vacated abbeys. It didn’t happen suddenly. It’s not like quite like the caricature portrayals we imagine, or have historically been fed, of a megalomaniac King issuing a decree of burn them all! and then it was done, just like that. The dissolving process was, much like its homonym, a slow corrosion, lasting many years, centuries really. Then in the nineteenth century ruins became a thing, thanks to the popularity of Romanticism and artistic works of the likes of Turner, Constable and Wordsworth: all those abandoned broken archways dripping in ivy and aesthetically overgrown with wildflowers, the sense of grandeur lost, the nostalgia for a distant way of life.

I learnt that in its heyday Glastonbury was one of the biggest and most important abbeys in England. Because of its location and the extent of the mythology attached to the site it was almost as important a religious place as Rome – the Vatican City of England if you like. When intact the abbey was longer than Bury St Edmunds (which at 570ft is the longest existing English abbey now) with a tower comparable with that of Canterbury Cathedral’s (235ft). Glastonbury is supposedly the site of the first church in Britain, and the place that’s been the longest continually occupied for Christian worship. Cee wasn’t convinced about Joseph of Arimathea’s connection to the place, or if he did come to Glastonbury, or even Britain at all, that he ever brought Jesus with him (via St Just-in-Roseland, obvs). But every land is allowed its legends. Is it really less likely than St George killing an actual dragon on a hill in Uffington? Who knows. 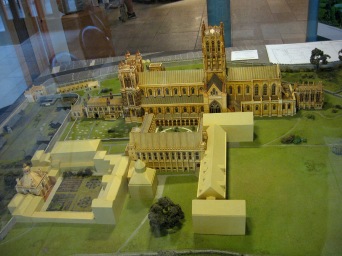 scale model of the abbey

I’m also slightly in two minds about the redistribution of wealth after the dissolution. Is it really right a religious body should be holding so many assets in the first place? Setting aside the fact that so much of that redistributed cash ended up funding wars I’m not sure that the socialist part of me, let alone the secular part of me, doesn’t agree. I have found myself on a similar train of thought when wandering around, say, St Paul’s Cathedral or the V&A in London and seeing all the holy treasures on display that must be worth squillions. I know ‘the nation’ owns them and that museums hold them in trust, but I can’t help thinking about national debt and what would happen if we sold off the holy gold to become solvent as a nation again? I don’t know. It probably doesn’t work like that. It is strange to me to think that pre-Henry VIII the church was such a huge proportional landowner, employer, part of everyone’s everyday lives and the fabric of the landscape. Imagine going into the future from 1000 years ago and ending up now: aside from the other inconceivables like technology and population expansion, the extent of the church’s influence is unimaginably altered.

For the better? Well, we’ll never know. I’m inclined to think that keeping religion out of the everyday as far as possible is a good thing, and who can say that it wouldn’t have been an inevitable consequence over the passing of the years even if Henry VIII hadn’t set the ball rolling? Five hundred years is a long time and the alternative histories that could have occurred and altered our way of life and England’s landscape are as unimaginable to us now as our present day would be to anyone from that long ago in the past.

A tale of getting mired in landscapes past and present on Bodmin Moor in Cornwall.
In which we dine in King Arthur’s Hall, I examine some more tenuous Arthurian connections, and my brother falls in a bog.