The North Wind Doth Blow and we shall have more bluster in the back yard than even the St Jude Storm could muster last Sunday night. We shall have the sort of day you’re supposed to stay indoors on, especially when you live on the coast. Except ‘avoid going out in strong winds’ usually translates to ‘get your boots on people’ provided the garden furniture isn’t actually taking off. We shall have the familiar-unfamiliar of strong and frequently gusting winds, oddly disconcerting in that they’re coming atcha from the wrong direction.

The coast path is deceptively warm, being sheltered from the north by the thick hedge. Everywhere I expect to get blown about I’m warm and calm, only to be blasted by a sheet of air from the wrong direction. I’d put on quite a lot of layers but once out of the wind it doesn’t feel like the beginning of November. But the flowers are gone. The blackberries and honeysuckle berries and bryony berries are gone. The leaves are going, and those remaining are the tired, in-between green of a coastal autumn.

I take the lower path to avoid a group of runners, only to be forced into a gap in the fence when I cross some stragglers who have eschewed the less muddy run for an easier route. I pass a couple filling shopping bags with sloes and I get snuffled round by dogs I don’t want to pat in case the wet dog smell sticks to my hands.

The sea below the cliffs to my left is an indigo blue, barely rippled. It looks too calm for the strength of the wind. About a quarter of a mile out from the shore it’s like someone’s drawn a line in the water, beyond which it’s a brighter blue and flecked all over with shifting blips of white, like a flock of gulls has landed on the surface of the water and can’t stop fidgeting their wings. Just as the hedge shelters the path so the land is blocking the worst of the wind from the near shore. A seagull – a juvenile herring gull – blows past at high speed like an unstable light aircraft. I think I feel raindrops and I wish I’d worn a different jacket.

Down on the beach the tide is still quite far out. The sandflats are wet and rippled, the run-off from the Maen Valley meandering across to meet the incoming sea. I love that feeling of walking in the sea in wellies, feeling the heft and shift of the micro-currents somehow amplified through the rubber of the boots while your feet are warm and dry. Although the tide is on the make the waves are struggling to make headway against the north wind. The North Wind doth blow and we shall have the tide coming in backwards.

The strand line is thick with the spoils of the week’s storms. Seaweed. A dead bird. Rubbish. The Usual. A rustically attractive piece of sodden drift wood makes me wonder if it’s worth a look in case something exciting’s been washed up. Something looking like the leathery skin of a great sea creature turns out to be a piece of carpet rolled in the sand. There’s a corn on the cob – minus the corn – and a bottle of engine cleaner. A roll-on deodorant. A tangle of blue rope. There’s always blue rope.

Families on half term holidays are having some old-fashioned outdoors day at the beach in coats and wellies. The dad excavates a trench for a complex sand construction with a proper garden spade under instruction from the kids. Others are off in the rockpools, or debating where best to wade barefoot the mini-river.

The north wind doth blow and we shall have fat raindrops on the backs of our necks from a brief but brutal shower. I’m soon soaked and cold on the back, dry and warm on the front. One family runs for cover in the car, a single boy hacking it out determinedly with his digging stick and branch of seaweed. 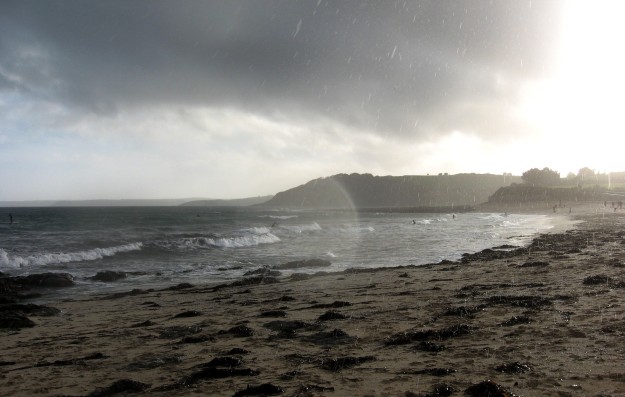 I stop at the beach again on my way back, having pottered around for an indeterminable amount of time relishing the small pleasures of not discovering anything particular in the nooks and crannies of the slate-crusted coast until I realise I am tired and my jacket has dried leaving my t-shirt damp underneath and I haven’t brought any lunch and it might be about three o’clock. I’ve just turned my feet towards the beach cafe when a second shower empties itself in a big way over Maenporth and its environs. I enjoy watching the weather blow around the cove whilst drinking tea and eating cake with everybody else who was on the beach a minutes ago. There’s a drumming on the canvas awning, and a dimming of the horizon, and a very British sense of drama when it’s just the weather doing what it quite often does in this neck of the woods.

On the way back I wear my cardigan as well and put my hands in my pockets and in the small creases between hedge and verge and path, even now in November I see freshly opened violets.

For two very different takes on windy days here are ‘Wind on the Hill’ by A. A. Milne and ‘The North Wind’ by Victor Teran.

in which it hangs on the back of the door all winter, waiting for it to be cold enough in spring to justify wearing it.